Melbourne, Victoria, Australia
Get in touch
2
AddThis Sharing Buttons
Share to FacebookShare to TwitterShare to EmailShare to WhatsAppShare to Messenger

St Kevin’s Gaelic Athletic Club was founded in 1956. We played our played first match in 1957 and proudly celebrated our 60th anniversary in 2016. The Club has been an important thread in the fabric of the Australian-Irish society in Melbourne since its foundation.

The 14 founding members chose the blue and gold club colours and established the first team; the first season was a great success, the team being narrowly beaten in the final. Season 1958 was even more successful- the team won the league and knockout cups. A quote from a member in 1958 illustrates the camaraderie of the time: he “considered himself lucky to have come in contact with a club such as St Kevin’s”, because he “realised that the club was keeping the games alive in Melbourne, and was founded and maintained at considerable expense to members”.

This has been an enduring theme for St Kevin’s; the club has always been a place for good friends and for friends of football and hurling. Over time, St Kevin’s GAC has made a consistent contribution to Gaelic football in Victoria, both on and off the field. The club has proudly been involved in every competition and numerous community events; St Kevin’s members were foremost in the development of Gaelic Park.

On the field, there have been many successes, but it is off the field friendships that make St Kevin’s a great club. St. Kevin's passion in the promotion of Gaelic football is matched by a thriving social scene which pivots around club nights at sponsor pubs, and of course, our famous annual Trivia night.

The club is proud to have supported the beginning of ladies football in Melbourne; our ladies team was established in 1996. Women have always played an important role in the club, the ladies team has grown to be a success story, both on and off the pitch.

The Club continues to thrive today due to the endless efforts of all those involved throughout the years. The continued development of the club is assisted by the healthy mix of Australian and others as well as Irish members involved in the committee or as players in the club’s teams. 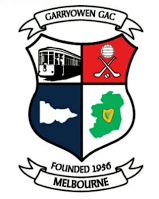